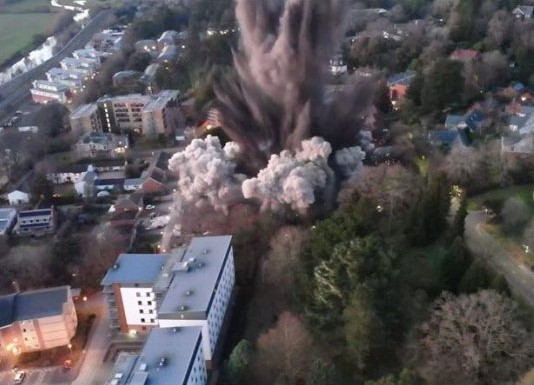 Eighty years after the Luftwaffe raids on Exeter during WWII, a 1,000kg High-Explosive bomb has just been discovered and detonated. In 1940 and 1941 there were a number of sporadic bomber raids on the city, but by far the largest occurred on 4 May 1942, when over 10,000 incendiaries and HE bombs were dropped on the city centre. It was one of the Luftwaffe’s so-called ‘Baedecker Raids’, which were fire-bombing attacks on British cities as a reprisal for the RAF raid on the German cathedral city of Lubeck in March 1942.

When the HE bomb was discovered in an allotment area of Exeter, Navy and Army bomb disposal units were immediately deployed. 400 tons of sand together with anti-blast coverings were placed over the bomb, but the subsequent controlled detonation appears to have caused widespread collateral damage. Most Luftwaffe bombs that fell on Exeter were 250kg incendiaries or 500kg HE, though several other large 1,000kg HE bombs had exploded during the raid of 4 May 1942. The recent discovery had failed to detonate on the night it was dropped – a lethal legacy and a reminder of the explosive power of just one bomb.