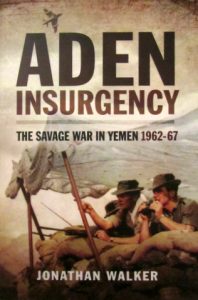 During the early 1960s the Cold War reached its climax. Britain’s dwindling power in the Middle East was under siege from Arab nationalism, the Communist bloc and from American designs in the region. Aden, with its strategic military base and old Protectorate buffer zone, was soon the main battleground. The 1962 Egyptian-inspired coup in the neighbouring Kingdom of North Yemen further tightened the noose. So began a bitter and bloody insurgency war in South Arabia. British regular an special forces were soon pitted against growing and formidable insurgency forces, fighting both a war in the mountains and an urban conflict in the backstreets of Aden. Intelligence agencies vied for control of ‘hearts and minds’. The British launched a clandestine war in Yemen to keep their enemies at bay. But still the situation in Aden spiralled out of control, culminating in a bloody slaughter in 1967. In  November 1967, the British Army finally withdrew from South Arabia.

Aden Insurgency is the extraordinary story of Britain’s last colonial conflict. Using a wide range of recently released archive and eye-witness accounts, the author charts the collapse of the South Arabian state. Set against a background of ruthless political ambition, these events shaped the Yemen of today.

Poland Alone Poland was the 'tripwire' that brought Britain in the Second World War but neither Britain, nor Poland's older…

Operation Unthinkable As the war in Europe entered its final months, the world teetered on the edge of a Third…