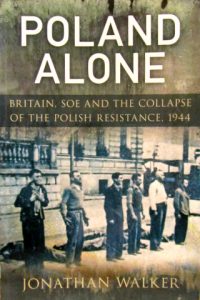 Poland was the ‘tripwire’ that brought Britain in the Second World War but neither Britain, nor Poland’s older ally, France, had the material means to prevent Poland being overrun. The broadcast, ‘Poland is no longer alone’ had a distinctly hollow ring. During the next four years the Polish Government-in-exile and armed forces made a significant contribution to the Allied war effort; in return the Polish Home Army received a paltry 600 tons of supplies. Poland Alone focuses on the climactic year of 1944 when the Polish Resistance attempted to gain control of Warsaw from the Germans. A bloody uprising ensued, but little help was received from the Allies. After the Warsaw Poles were massacred, the Red Army finally moved into the city and then occupied the whole country. Jonathan Walker examines whether Britain could have done more to save the Polish people and the victims of the Holocaust. While Allied political and military leaders clashed over the level of support for the Poles, SOE, RAF and Intelligence personnel fought a bitter covert war to help the Polish resistance fighters. The War ended with over five million Poles dead. Had Britain betrayed her old ally?

Aden Insurgency During the early 1960s the Cold War reached its climax. Britain's dwindling power in the Middle East…