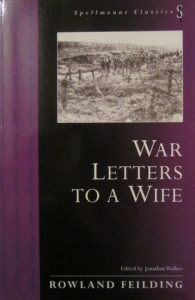 This is a new authorised edition of one of the most remarkable collections of Great War letters, with the addition of previously unpublished material and full biographical and background notes. Feilding, who served with the Coldstream Guards, the Connaught Rangers and the London Regiment saw action in the most fearsome battles of the Great War — Loos, The Somme, Messines, Cambrai, The 1918 German Spring Offensive and finally the Allied advance to victory.

He saw many of his friends die but miraculously, he survived. Included in this edition are some of his tender letters to his daughters, yet when writing to his beloved wife, he spared her little of the horrors of war:

‘There was a sudden loud explosion, and bits flew through the air about us. We looked around and saw Leach, the bombing officer of the battalion, lying on his back in a pool of blood, his arms outstretched and both his hands blown off. I have since learnt that he was detonating a bomb, when the safety-pin slipped. His one chance of throwing it safely away was gone, so he turned his back to us,     faced the wall, and hugging the bomb in his hands, allowed it to explode between his body and the wall. It is impossible to speak of such courage and self-sacrifice. He is since dead. He was only twenty-two.’

Feilding personally knew many of the senior commanders and politicians of the day and this gives his writing an authority, especially when commenting on turbulent events in Ireland. Determined to speak of his own mens’ courage, Rowland Feilding nevertheless  left a lasting tribute to all the warriors from that ‘war to end all wars’.

One of the letters from this book formed one of the questions in a recent English Literature AS Level paper on the literature of the Great War.

Operation Unthinkable As the war in Europe entered its final months, the world teetered on the edge of a Third…