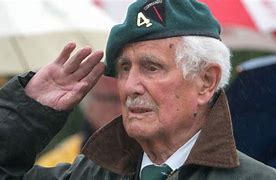 Today, Jonathan’s uncle Roy Maxwell, a veteran of No. 4 Commando, remembered the dramatic landing of his troop on Sword Beach. As part of HQ Troop, he came in at 0730 hours by landing craft, shortly after zero hour. As he and his comrades advanced up the beach under heavy enemy fire, the attachment of French commandos under Phillippe Kieffer peeled off to assault the German strongpoint within the old Casino on the beachfront. Meanwhile, Lord Lovat, the Commander of No.4, had brought his personal piper, Bill Millin, to pipe the men ashore. But Roy recalled that he could barely hear the strains of The Road to the Isles above the tremendous din of battle. The men of No. 4 then fought their way around the rear streets of Ouistreham to help form a bridgehead over the River Orne. It really was the ‘Longest Day’. (image: Bild)