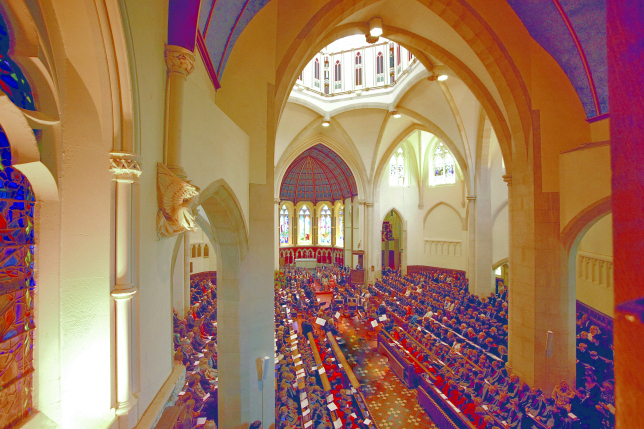 Jonathan was asked to address the pupils and parents at his old school, Clifton College. The occasion was the annual Remembrance Service for the prep school held on 11 November 2013. Prior to the service the names of over 500 Old Cliftonians, who fell in the two world wars, were read out by pupils and masters. The packed congregation received a welcome and introduction by the school chaplain, Rev. Simon Chapman (who has served in Afghanistan) followed by rousing hymns and thoughtful readings. Pupils, playing bugles, sounded ‘The Last Post’ preceding the silence, which was then followed by a splendid piper playing the lament. The choir gave a moving rendition of the anthem ‘God So Loved The World’, followed by Jonathan’s sermon. He looked at the meaning of remembrance with particular emphasis on the families of the fallen and how wide the loss was felt. Since there were many French pupils at the school, he recounted the sacrifice of the WWII SOE agent Violette Szabo. A French pupil gave a beautiful reading of Violette’s famous poem, ‘The Life That I Have’, which the agent used for her secret codes. At the end of the service the pupils filed out in silence and laid their poppies at the foot of the book of remembrance. It was a touching service put together by the Headmaster, John Milne and the school chaplain and gave both pupils and parents alike much to reflect upon.