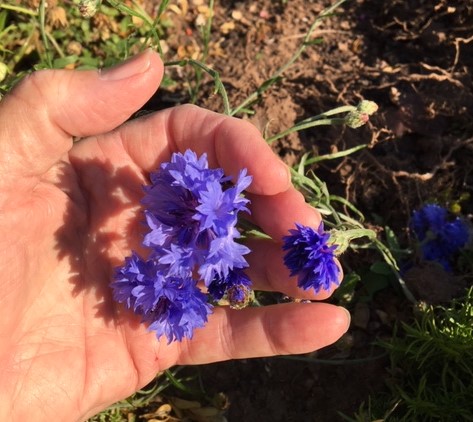 This summer has seen a wonderful show of blue cornflowers in the garden. As well as being an attractive and delicate flower, it may surprise many to know that it has a deeper and more significant meaning to the French. Known as Les bleuets de France, the flowers have, for a hundred years, been the memorial flowers of France – the equivalent of the British Legion’s red poppies. Silk or paper replicas of the cornflower are sold on the streets of France on the anniversary of  VE Day (Fête de la Victoire, 8 May) and Remembrance Day (Jour l’ Armistice, 11 November), but they do not seem to enjoy such a high profile as the British poppy.

The adoption of the cornflower as a national symbol of French remembrance was largely down to two women – Charlotte Malleterre and Suzanne Leenhardt. For, during The Great War, they encouraged wounded soldiers to create replicas of the flowers, which would be sold to raise funds for the rehabilitation of the war wounded. The origins of the symbol are thought to lie in the flowers’ abundance in the countryside of Picardy and when the new young recruits arrived on the battlefields in their recently issued blue uniforms, they were nicknamed ‘les bleuets’ by their older comrades.

Jonathan is an experienced speaker and his talks cover a wide range of military history topics.…

In May, a visit to the famous Lello's bookshop in Porto, Portugal. The business was…